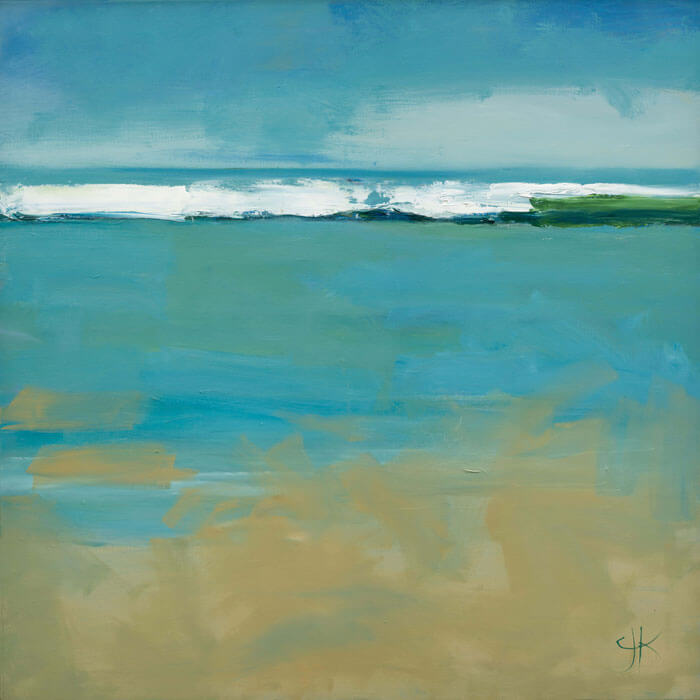 This painting is about having the bravery to paint that one heavy impasto wave in a confident stroke. The foreground fragmenting was inspired very loosely from a painting by Henri-Edmond Cross – the Golden Isles, 1891/92

Although the subject of the canvas is indeed the islands, Cross has eliminated all picturesque elements and concentrated on the effects of light on colour. The various elements in the landscape become three large colored bands: the sand, sea and sky.

In keeping with the Neo-impressionist technique that he had recently begun to apply, he used rounded brushstrokes of various sizes from the dabs in the foreground to the tiny dots on the horizon, adjusting the spacing to create a slight effect of perspective. (Musée d’Orsay)

I took inspiration from this and used it in the foreground of this painting  but not in small dots side by side instead I used a much larger bold brush application but borrow the idea that the observer’s eye mixes the colors.

The term Neo-Impressionism refers to a technique where color pigments are no longer mixed either on the palette or directly on canvas, but instead placed as small dots side by side. Mixing of colors takes place from a suitable distance, in the observor’s eye, as an “optical mixture“

The pointillism is to take an idea and make it your own. – LOL

This site uses Akismet to reduce spam. Learn how your comment data is processed.

We use cookies to ensure that we give you the best experience on our website. If you continue to use this site we will assume that you are happy with it.Ok