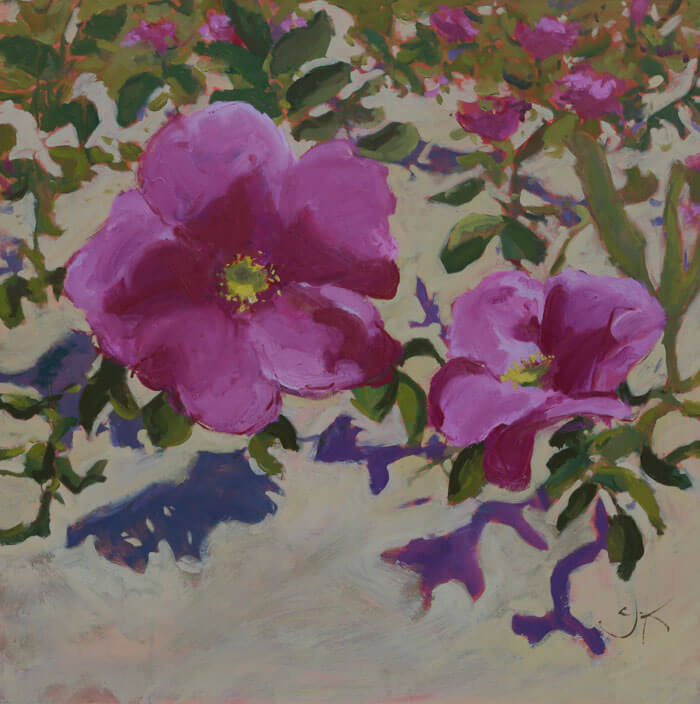 These beach roses were in bloom during my stay on Cape Cod and the beautiful scent wafts through the air as you walk by. These made me think of my daughter and so just had to be painted. I loved the shadow pattern in this composition. 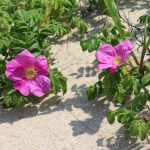 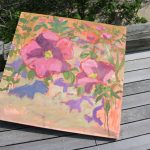 early development of Beach rose painting by CJK. 30×30 oil on board 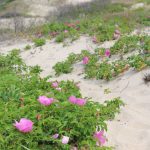 Saltspray rose, seaside rose, dune rose, beach rose—by any name, it is as common as sea grass on the coast, as iconic as a lighthouse on a cliff. Flourishing up and down North America’s northeastern seaboard, this rose is so naturalized on the shores of New England that it seems like a native. It grows as wildly as weeds on the prairie. But in fact, this rampant rose is an import, and a relatively recent one at that. Indigenous to the Far East, it was unknown in the West until the late eighteenth century, when a Swedish botanist by the name of Carl Peter Thunberg first spotted it in Japan. Charmed by its crinkly petals and serrated leaves, he called it Rosa rugosa, or “wrinkled rose.”…………Growing freely on Cape Cod and the Islands, it was gaining a foothold in Connecticut and Rhode Island and a toehold in New Hampshire and Maine. Amateur botanists recorded its appearances and its habits. How it got here is anyone’s guess…………..According to legend, it washed up after a shipwreck. (Why the castaway rose was onboard in the first place is a practical question that this legend does not address.) Another possibility is that it was an accidental stowaway: seeds or root bits may have been crated up with other plants shipped overseas. Or maybe a bird, not a boat, delivered Rosa rugosa—and considering how freely swallows and sparrows disperse seeds, that may be the case. -http://coastalhg.com/In-the-Garden/the-beach-rose.html

Claire J KendrickSeascape SeriesJune 20, 20160 comments
Read More
Load More
We use cookies to ensure that we give you the best experience on our website. If you continue to use this site we will assume that you are happy with it.Ok