The Provincetown Community Compact, Inc. (The Compact) have awarded me a residency at the C-Scape Dune Shack located in Cape Cod. MA. 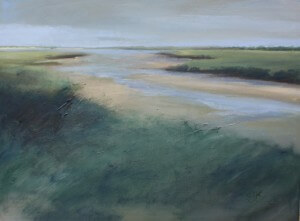 C-Scape is one of 19 shacks located within the Peaked Hill Bars National Register Historic District. The primitive nature of the structure—no electricity, indoor plumbing, or telephone—and its physical isolation allows for uninterrupted solitude and refuge. The dwelling is a 1 1/2 story, three- room structure, including a studio and wood stove. It has a propane cooking stove and small refrigerator, and a composting toilet.

Artist Notes
“The thought of working in isolation is both wondrous and frightening, I consider granting myself total immersion a great gift away from the commitments of everyday life. As a painter I know the importance of solitude and the roll it has in developing ones creativity. Some would say this seems like an extreme length to go in the pursuit of time alone — but an idea or inspiration born of such a commitment has attracted a long list of notable artists and writers in American history. They have gravitated to this wondrous, beautiful place seeking time in Nature to be surrounded by it and leave the distractions of daily life behind.” – CJK 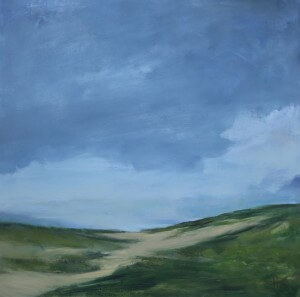 The Who’s Who of Dune Dwellers

The dune shacks are mentioned by Henry David Thoreau in his book Cape Cod published in 1865. The famous playwright Eugene O’Neill, who purchased one and spent many summers there with his second wife, Agnes Boulton. O’Neill penned Anna Christie (1920) and The Hairy Ape (1921) while living in his shack, and in doing so gave the whole collection of dune shacks something of an arty cachet.” Other artists and writers lived in the primitive dune shacks, including Harry Kemp who proclaimed himself “the Poet of the Dunes,” Jack Kerouac, e. e. cummings, Norman Mailer, and Jackson Pollock. Writers who wrote about the dune shacks, besides Thoreau, included Henry Beston, whose The Outermost House chronicles a season spent living in the dune shacks, and Hazel Hawthorne-Werner, who wrote Salt House about her year in 1929 in the dunes.

Today there are 19 dune shacks in the historic district, 18 of which are owned by the National Park Service. Private individuals are able to enter a lottery for an opportunity to reside for a period of time in the shacks. – Wikipedia.org.

Painter Wolf Kahn in 1947 attended the Hans Hofmann School in Provincetown. He lived in Hazel Hawthorns dune shack in the 1950’s. His wife Emily Mason was also a painter.

The Provincetown Community Compact, Inc.
The Compact was established in 1993 by Jay Critchley as a community-building and philanthropic organization to support living artists and the vitality of the arts community. The mission of The Compact is to advance the health and cultural wellbeing of Provincetown, its people, and the natural environment of the Lower Cape. The Compact also acts as an incubator (think-ubator) for social, environmental and artistic projects.

The Compact has envisioned Provincetown as a Cultural Sanctuary.

Artist Notes
“I have been selected to stay for one week – early spring 2016. It will be a week of solitude and plein air painting – fingers crossed for some mild weather. “C-Scape,” like the other dune shacks, is a simple structure. It has three small rooms, the oldest of which dates back to the 1940’s. It is without electricity, indoor plumbing or telephone service, this modest style of living, combined with the isolation in the Province Lands, offers residency winners a rare solitude. Now I have also read they are mice infested but let’s not rain on the parade just yet!!! I am pleased to be selected in this highly competitive program and in the second year of motherhood this is a rare and special treat and one I intend to embrace.” – CJK

Artist Notes on Creativity and Isolation
“This is not an experience for everyone and nor should it be, but I think the roll of the artist is to bring an experience and emotion to the work. Something always unexpected happens when working en plein air it is never as you would paint in the comfort of the studio. Away from distractions, constant interruptions it is my commitment to this experience and desire that creativity will flow, I am not intending to put my feet up and wait for it. I understand it will take a little grit and determination. I fear that there may be a feeling of having too many hours in the day, a fear that the nights will be long, I’m not thrilled about sharing my temporary dwelling with furry friends!! I know that these irrational temporary fears will subside. I tell myself we all have these fears when stretching our wings or trying something new. The inner critic with cautionary tales can sabotage even the best laid plans if you let them. To actively choose this way of life, to go off grid is living diversely I feel is a strength and a resilience.” – CJK 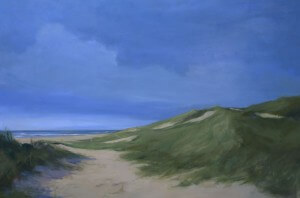 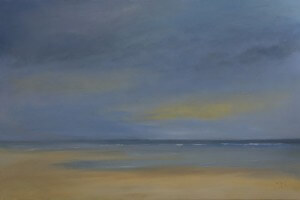 The Cape Cod National Seashore (CCNS), created on August 7, 1961 by President John F. Kennedy,[3][4] encompasses 43,607 acres (68.1 sq mi; 176.5 km2)[1] on Cape Cod, in Massachusetts. It includes ponds, woods and beachfront of the Atlantic coastal pine barrens ecoregion. The CCNS includes nearly 40 miles (64 km) of seashore along the Atlantic-facing eastern shore of Cape Cod, in the towns of Provincetown, Truro, Wellfleet, Eastham, Orleans and Chatham. It is administered by the National Park Service.

Originally from Northern Ireland – Europe’s North West outpost – Kendrick came across the pond to the United States in 2006. Kendrick travels the road less traveled, with the phrase “Less is more” from her friend and mentor Anne Packard who introduced her to life on the Cape. The two met in St Augustine and admired each others work and Claire was invited to paint at Packard’s coastal home in Provincetown 2011. It was a surprising invitation to those who know the infamous painter who is extremely private & reclusive – even to the professional galleries who represent her work.

Kendrick is returning to see her mentor but also to stay and paint at one of the National Seashores famous Dune Shack’s. “I am in anticipation, life will be striped of the superfluous – no cell phone or computer – the essentials, paint supplies, a gas ring to cook on and gas light to read with at night, alone for a week perched on the dunes with uninterrupted views and huge open vistas looking out to sea, this is escapism and a chance to observe and emotionally connect to nature in its raw and finest moments. This is the thrill of the plein air painter.” – CJK

Photos of Kendrick’s last trip painting plein air in Cape Cod with Anne Packard and her daughter Cynthia Packard back in 2012. It was a trip that marked tremendous growth in her work.

“It was my first time visiting Cape Cod and the 10 day painting visit gave me an understanding of why this beautiful place is such a haven for artists.”  – CJK

To read about her 2012 experience Painting with the Packard’s click on this link.